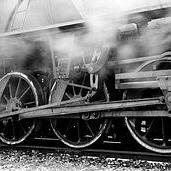 Antonymott Member Since
9 years ago

This is huge! Astro with React+MUI. Thanks so much! @LuckyArd110 : the way I used MUI was pretty much standard, added it to a React component, then consumed that component in a .astro page. Can't say I've tried lots of mui styling, but I can confirm the following works: pnpm add @mui/material @mui/x-data-grid @mui/system. I haven't deployed, but an MUI data-grid works well in dev and production mode. From what I gather, the Astro core team worked to get MUI working but won't announce it until the next release. Having an excellent quality grid component styling (like MUI) is very helpful, especially as I can confirm that neither React AG-grid or the new Solid AG-grid work in prod mode with Astro 1.6.10

Please tell us about your environment: Ubuntu, VScode, Vite: identical to Niall's SolidJs template-setup on the video

Well, I found the problem, as there's no actual solid-js 'fetch' example code on the ag-grid docs or repo yet, just the code in Niall's intro video!

Viewers coding along with Niall's SolidJS video who want the 'fetch' section to work need to change line 13 to:

then your good to go!

Thanks again Niall for adding SolidJS...awesome!

Integration with Astro and apolloclient (@merged/solid-apollo) does not fetch graphql sample data as does the React example. This is probably not a bug with solid-js, more likely an implementation opportunity for @merged/solid-apollo.

Why did I file here and not over at @merged/solid-apollo? Hoping to help speed up the adoption of solid-js more broadly! Svelte-apollo npm package has ~ 1,500 weekly downloads compared to less than 20 of @merged/solid-apollo...for a package not specifically for Astro integration.

I have a hunch that if we (I) maintain a starter template Astro-solid-apolloclient that just works out of the box, it might accelerate other devs to try out solid+astro for projects that can benefit from graphql.

Steps to Reproduce the Bug or Issue

I set up the above repo to contain both Astro + React + ApolloClient example (working) and an attempt to make it work with solid-js instead of react, so the src also includes solidApp.jsx and solidClient.jsx.

If you fork it and run pnpm dev as is, you'll see the working React + Astro + ApolloClient (success screenshot below).

To test the solid-js implementation, you only need to uncomment line 8 of /src/layouts/Layout.astro:

The fetched data should appear under the "solid component here" placeholder, but nothing at all appears (and no errors).

To fully recreate the base case using React and then play around to get solid-js working:

This repo contains two Astro + ApolloClient UI integrations: React and solid-js and is an adaptation of this tutorial of Apollo's Client in Astro using @merged/solid-apollo npm package. 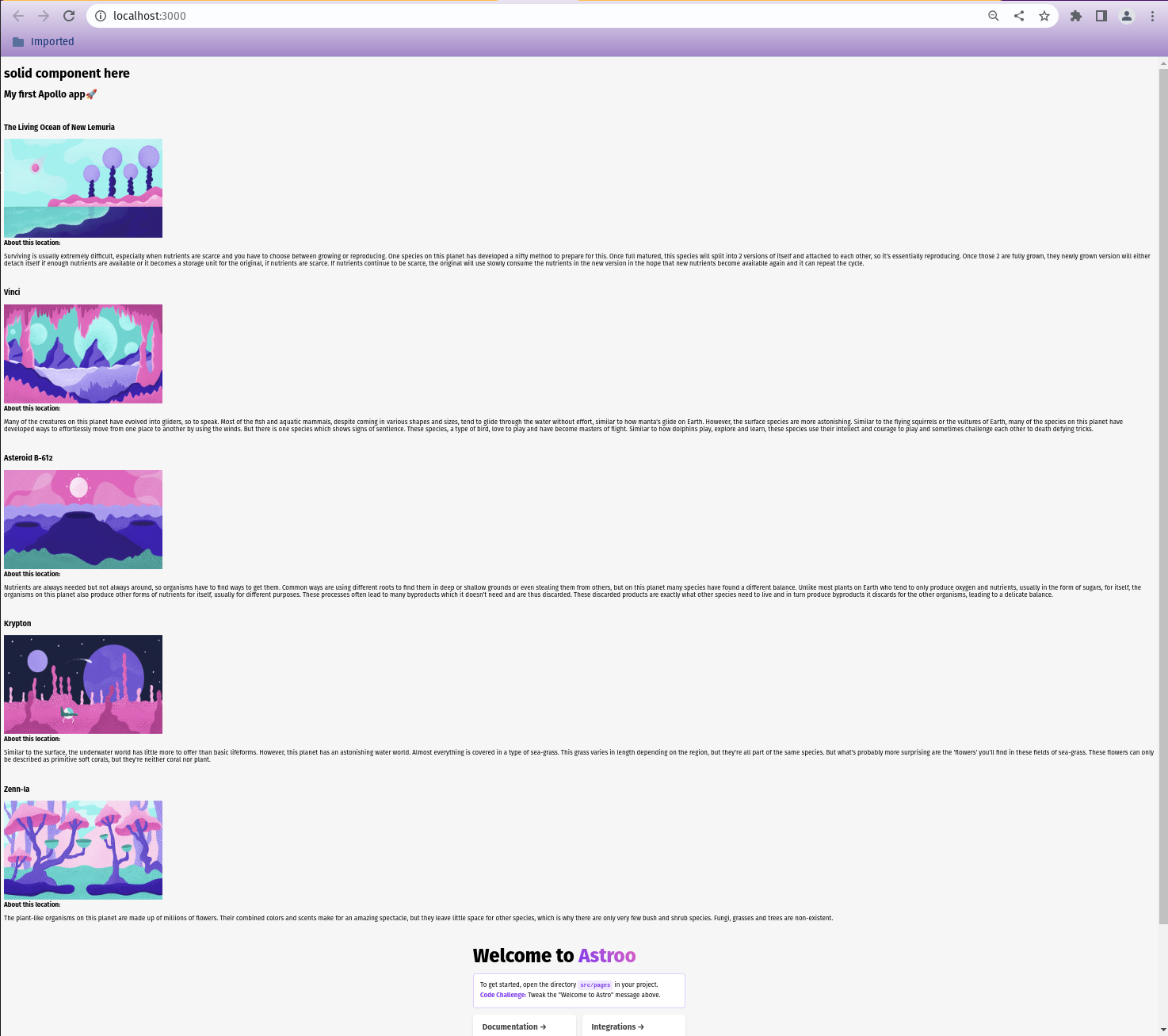 Astro with solid-js is an interesting (fast/simple/opt-in-complexity) alternative to React. I'm guessing lots of devs would also like to put UX first and let go of the virtual DOM, but there aren't a lot of starter projects that to jump start conversions.

The solid-js examples have helped me, so I'm trying to help contribute to the solid-js community with this base template. I did start down the rabbit hole and worked on the issue myself but quickly encountered cryptic errors like "Error: Comp is not a function", which @ryansolid helped solve 3 years ago but under different conditions (issue #97)

As I learn from making this example work, I'm happy to maintain a repo of the working example as a starter template to help others who'd like scaffolding to move from React to Solid.

Closing as perhaps this issue is not a priority for solid-js users at the moment. After I've done more research I may open an issue or hopefully a pull request (if I solve it) over at @merged/solid-apollo. Fortunately, the workaround for the time being is that the astro-react-apolloclient works fine.

For anyone from the solid community who comes across the same issue, I did do some further tinkering. We have to add "cache: new InMemoryCache()" to the new ApolloClient from @merged/solid-apollo, but Astro interprets the component as a React component upon rehydrating, causing errors, even with the explicit client directive: client:only="solid-js".

On 05 Nov 2022 at 12:50:25
Create Branch
Antonymott In antonymott/astro-solid-apolloclient Create Branch

Is there an es6 transpilation of autobahn.js? I googled but couldn't find autobahn.mjs or links to an es6 version. I'm trying out autobahn with Deno which doesn't work easily with node code unless it's es6.

Yeah, I dug into the code a bit more and fixed the 4 problems locally. If there aren't many use cases like this, perhaps there's nothing more to be done at this time, and perhaps we just close this issue? For anyone in the future wanting a quick fix for the same issue, I made the deno.land complaints go away by editing (locally) the npm package autobahn-browser: first I switched to the un-minified version (which you or some thoughtful maintainer helpfully included in the package!). Once I switched to autobahn.js as default, it was easy to fix 3 of the 4 issues, the code "!x in y" is parsed as "(!x) in y" by adding parentheses to get "!(x in y)". Finally, I changed line 1614 j = eval('(' + text + ')'); as direct eval with a bundler was not recommended. Deno minifies and bundles js so no production performance is affected by using the edited un-minified version in the npm package. Hope this helps someone!

Linting in VS Code not working when using enableProjectDiagnostics

I set up a simple deno project with only this file. But the linting is messed up. It looks like the default TypeScript language server is still parsing this file, even though I have installed the extension.

Linting error not suppressed as of Oct 26, 2022, mentioned in this Astro Deno SSR adapter issue